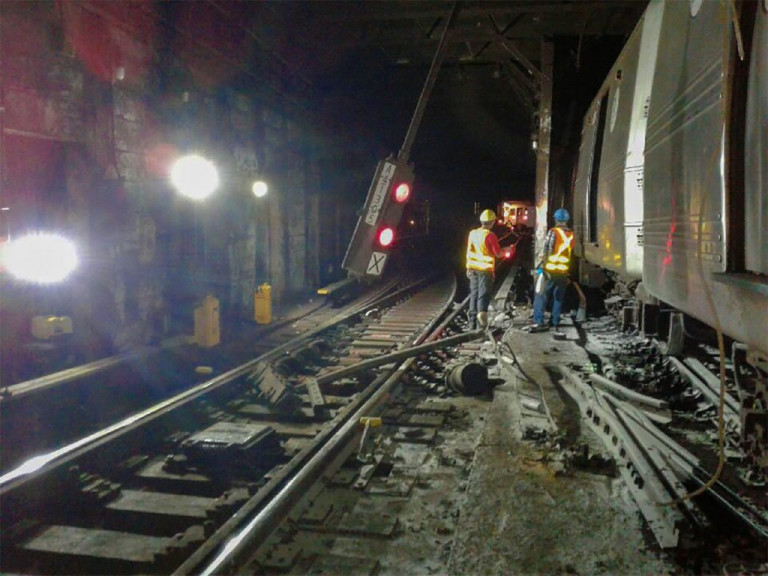 One of the many glorious things New York City has to offer is the NYC Subway system. Some people might call it a magical train, taking you from any point in the city to another. Others might loath it for its inefficiency and delays. But, each day millions of New Yorkers ride the subway to get to work, class, the gym, restaurants, and just about anywhere else their hearts desire.

Today, however, the NYC Subway system had a setback when a subway train derailed and crashed into a wall leaving more than 30 people injured. Today, many New Yorkers realized that the NYC subway system may have another adjective to describe it: deadly.

On Tuesday, June 27th, the A train derailed between 135th street and 125th street stations in the Harlem neighborhood ofz Manhattan. Investigations on what caused the crash are still ongoing but according to several MTA officials, the crash was caused by an abrupt triggering of the train’s emergency brake.

The derailment of the train caused massive transit delays for New Yorkers throughout the city today. It injured over 30 people and left millions more questioning their morning commutes and the safety precautions that the MTA is taking. Recently, there have been more problems than ever with the MTA due to its antiquated system. Governor Andrew Cuomo has been under heavy criticism for the continual problems and he released a statement on Tuesday night, saying he hopes to address the “fundamental issues plaguing the transit system.”

The New York City subway accidents have remained steady over the last 5 years and have cost the city nearly $430 million dollars in lawsuits. Just in the last few years, there have been multiple train derailments that injured and killed hundreds of people. Earlier this year, in January, the LIRR train derailment in Brooklyn injured over a 100 people. In April of 2016, an Amtrak train leaving New York killed two people and injured around 30 more when it struck a backhoe in Delaware County, PA. One of the most tragic accidents happened in May of 2015 when a train derailed outside of Philadelphia en route to New York killing 8 people and injuring over 150 others. In December of 2013, an engineer on a Metro North train fell asleep while operating the train and entered a curve In the Bronx 52 mph faster than usual causing the death of four and injuries sustained by over 75 people.

While it is unclear what exactly caused today’s derailment, it is important for New Yorkers to know their rights in the event that they are injured in a train accident. Train accidents have a variety of causes that are either due to the negligence of the transit company in their failure to maintain the track or the negligence of the conductor in operating the train. The MTA has the responsibility to maintain the tracks and the train and to properly train the conductor to avoid such accidents.

If you or a loved one has been injured in a train or subway accident it is important to learn about the options to hold all the parties who caused your injuries accountable for their negligent actions. Sometimes it is difficult to determine who these parties are, especially when there are multiple parties involved. For this reason, it is very important for New York train accident victims to seek legal representation from an attorney who has the knowledge and skills of such litigation.

The New York Train Accident Attorneys at Linden Law have recovered millions of dollars on behalf of our clients and have experience and expertise in train accident law. If you have been injured in a train or subway accident, the Attorneys at Linden Law will aggressively work to recover the full monetary value of your case. You may be entitled to financial compensation and damages and should contact the attorneys at Linden Law at (212) 804-8440 for a free legal consultation from an experienced legal professional.

NYC name a street after Linden Law - LINDEN Boulevard
What's the Safest Way to Travel? Travel Accident Legal Help
Injuries from Falling Down Stairs - Lawyer Help
Can You Sue a Police Officer in New York?
Steps to Take When Doctors “Breach Duty of Care"
Men Get Breast Cancer Too